Kabab-Ji (the claimant in the ICC arbitration, appellant before the UK Supreme Court), is a Lebanese company specialising in Lebanese cuisine and owns trademarks underpinning its unique restaurant concept. Through a Franchise Development Agreement (the “FDA”), Kabab-Ji granted a licence to a Kuwaiti company in July 2001, Al Homaizi Foodstuff Company (“Al Homaizi”) to operate a franchise using its restaurant concept in Kuwait for a period of ten years. Under the FDA, Kabab-Ji SAL and Al Homaizi subsequently entered into a total of ten Franchise Outlet Agreements (“FOAs”) in respect of individual outlets opened in Kuwait. The FDA and FOAs (collectively the “Franchise Agreements”) were all expressly governed by English law. The Franchise Agreements also provided for ICC arbitration seated in Paris, France.

In 2005, the Al Homaizi Group underwent a corporate restructuring. A new entity named Kout Food Group (“KFG”) was formed and Al Homaizi became a subsidiary of KFG. KFG was the respondent to the ICC arbitration and before the UK Supreme Court. 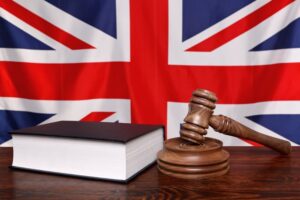 The Issues Before the Supreme Court

As in Enka, the first question that arose was to identify which system of law the English court must apply to decide whether there was an enforceable arbitration agreement. Here, if it were correct that the parties made an express choice of English law, and not an implied choice of French law as governing their arbitration agreement, two further issues arose. One is whether, as a matter of English law, the defendant never became a party to the arbitration agreement. The other is whether, procedurally, the UK Court of Appeal was right to have decided that question and given summary judgment refusing enforcement of the award.

Focusing on the first question, which is of most practical consequence for arbitration users, the Supreme Court followed the decision in Enka and found that the law governing the question of whether KFG became a party to the arbitration agreement was English law.

The relevant clauses of the FDA were as follows:

This Agreement consists of the foregoing paragraphs, the terms of agreement set forth herein below, the documents stated in it, and any effective Exhibit(s), Schedule(s) or Amendment(s) to the Agreement or to its attachments which shall be signed later on by both Parties. It shall be construed as a whole and each of the documents mentioned is to be regarded as an integral part of this Agreement and shall be interpreted as complementing the others. Article 14: Settlement of Disputes

14.2. Except for those matters which specifically involve the Mark, any dispute, controversy or claim between LICENSOR and LICENSEE with respect to any issue arising out of or relating to this Agreement or the breach thereof, […] shall, failing amicable settlement, on request of LICENSOR or LICENSEE, be finally settled under the Rules of Conciliation and Arbitration of the International Chamber of Commerce by one or more arbitrators appointed in accordance with the said Rules.

14.5. The arbitration shall be conducted in the English language, in Paris, France.

Article 15: Governing Law This Agreement shall be governed by and construed in accordance with the laws of England.

The UK Supreme Court held that clause 15 of the FDA providing that “this Agreement” shall be governed by the laws of England was ordinarily and reasonably understood to denote all the clauses incorporated in the contractual document, including clause 14. This evidenced that the parties did not intend to exclude the arbitration agreement from their choice of English law to govern all the terms of their contract, including the arbitration agreement.

Recalling that the case before the Court was in the context of an appeal from an application for enforcement, the relevant statutory regime applicable was Article V(1)(a) of the New York Convention on the Recognition and Enforcement of Foreign Arbitral Awards as enacted in Section 103(2)(b) of the 1996 Arbitration Act. Section 103(2)(b) states:

(b) that the arbitration agreement was not valid under the law to which the parties subjected it or, failing any indication thereon, under the law of the country where the award was made;

As in Enka, the Court noted that, under Article V(1)(a), it is only if there is no “indication” of a chosen law should there be recourse to the seat as the law of the arbitration agreement. A general choice of law clause in a written contract (such as the choice of English law in the Franchise Agreements) would normally be a sufficient “indication” of the law to which the parties had subjected the arbitration agreement.

The Court further dismissed the claimant’s argument based on the UNIDROIT Principles leading to its erroneous conclusion that in the absence of a sufficient indication of the law which is to govern the validity of the arbitration agreement, it would be necessary to fall back on the default rule that the applicable law is that of the seat of the arbitration, i.e., France. This argument stemmed from clause 14.3 of the FDA, providing “the arbitrator(s) shall also apply principles of law generally recognised in international transactions”. The parties agreed that this was to be understood as a reference to the UNIDROIT Principles of International Commercial Contracts, a set of principles formulated by international scholars and published by an intergovernmental organisation.

The Court held that these principles only bound the arbitrators in addressing the merits of the dispute and had no effect on the arbitration agreement. The Court, assuming (but not deciding) that a “law” (in article V(1)(a) of the Convention and section 103(2)(b) of the 1996 Act) should be restricted to the law of a country, considered that the law to be applied would consist of the system of national law selected by the parties without regard to the UNIDROIT Principles.

The Supreme Court therefore upheld the Court of Appeal’s decision, finding that English law governed the arbitration agreement and therefore applied to the question of its validity. Under English law, KFG had not become a party to the FDAs and, therefore, the arbitration agreement could not extend to KFG. As a result, the Supreme Court refused the recognition and enforcement of the ICC award.