Under English law, if a claimant unreasonably delays the prosecution of its claims, the arbitral tribunal has discretion to dismiss them for “want of prosecution” (or to take less drastic measures to “penalize” the claimant, for instance, in terms of costs, interest or the conduct of the proceedings). Yet, it will normally not do so, if the limitation period (be it statutory or contractual) has not yet expired, as the claimant could simply initiate new arbitration proceedings. 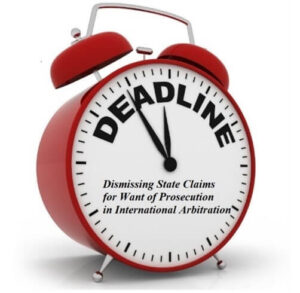 Below, we provide the legal basis for parties to make an application to strike out stale claims for want of prosecution in international arbitration (Section I), a brief analysis of the criteria that need to be met for it to succeed, as developed by English jurisprudence and doctrine (Section II), how such an application is normally dealt with procedurally (Section III), as well as what could be the potential rulings of a tribunal on such an application, along with their legal effect (Section IV)

I. Legal Basis to Strike Out Stale Claims in Arbitration

Under Section 41(3) of the 1996 English Arbitration Act (“Arbitration Act”), an arbitral tribunal has the power and discretion to dismiss a claim if:

Section 41(3) of the Arbitration Act intended to replicate the power of the High Court to dismiss a claim for what is known as “want of prosecution”, with the wording of the provision resembling the phrasing used in leading cases on the court’s power to dismiss claims. After the Arbitration Act first came into force, the old court power (under RSC Order 25 in particular) to strike out claims for want of prosecution was removed and replaced with a much more general (but arguably more limited) power under Civil Procedure Rules (“CPR”) 3.4 (as mentioned in Dera v Derya Inc [2018] EWHC 1673 (Comm), paras. 61-62).

II. Criteria that Need to Be Met for Striking out Stale Claims in Arbitration

The criteria that need to be satisfied for an action under Section 41(3) of the Arbitration Act to succeed, as explained in detail in the C. Ambrose et. al., London Maritime Arbitration (2018) textbook (paras. 14.19-14.33), as well as in Trill v Sacher [1993] 1 WLR 1379 (a pre-CPR authority related to court litigation, yet still relevant to arbitration), where the court lays down a summary of the “principles and guidelines for use on an application to strike out for want of prosecution” (pp. 16-17), are as follows:

Inordinate delay means excessive delay, which will depend upon the particular facts of each case, as well as the standards of those normally involved in that type of arbitration, if any.

As explained in Trill v Sacher [1993] (p. 17), save in exceptional cases, an action will not be struck out for want of prosecution before the expiry of the relevant limitation period. Before the limitation period has expired, the delay cannot properly be regarded as “inordinate”. Though the delay is both inordinate and inexcusable, the court would not in the ordinary case exercise its discretion to strike the action out if a fresh writ could be issued at once. To do so would only delay the trial.

More recently, in Dera v Derya Inc [2018] EWHC (see ruling in para. 183(a) and full reasoning in paras. 59-73), it was emphasized that the applicable limitation period was not “the” yardstick by which the delay will be assessed, but merely “a” yardstick. The court also accepted and cited to authorities that support that it would be inappropriate for an award dismissing the claim to be made within the applicable limitation period (para. 66). On the facts, the court ruled that a claim which is particularised within the six-year limitation period applicable to contractual claims pursuant to Section 5 of the 1980 Limitation Act can nevertheless be struck out for “inordinate delay” under Section 41(3) of the Arbitration Act, when the parties have contracted for a shorter limitation period.

Inordinate delay is prima facie also inexcusable and, once established, the burden of proof naturally shifts to the claimant to put forward a credible excuse for its delay in pursuing its claims. A credible excuse commonly invoked is evidence of settlement negotiations during the relevant period.

As further explained in Dera v Derya Inc [2018] EWHC, the burden of proof lies on the applicant party to prove on a balance of probabilities that the inordinate delay is inexcusable (see ruling in para. 183(d)). However, “If the responding party has good reason for the delay it will no doubt come forward with that evidence“, otherwise, if the responding party cannot identify what it contends to be a credible excuse for his delay, “a tribunal will normally be driven to the conclusion that there is (probably) no such excuse” (para. 141).

3. Serious Prejudice or Substantial Risk of Unfair Resolution of Disputes

Assuming the respondent can establish inordinate and inexcusable delay on the part of the claimant, it must then go on to satisfy one of these two alternative threshold criteria, which overlap:

Serious Prejudice: The requirement of serious prejudice will normally be satisfied where the delay has resulted in deterioration of the evidence necessary to the respondent’s case. The respondent has to identify in some detail how the evidence will be impaired by the delay, which will usually involve identifying particular witnesses or categories of unobtainable documents. The arbitral tribunal must also be satisfied that there is a causal link between the inordinate delay and the prejudice.

Substantial Risk of Unfair Resolution of Disputes: This alternative ground overlaps to a large degree with the existence of prejudice. It will be rare for a respondent to establish this ground without also establishing that the delay has prejudiced its ability to present its case. But such cases do occasionally arise, for instance, where the overall costs of the trial have been substantially increased by the claimant’s delays, where the alternative ground might, exceptionally, be established.

This is what happened in Grindrod Shipping v. Hyundai [2018] EWHC 1284 (Comm), where the court dismissed a challenge of an LMAA award, in which the tribunal exercised its power under Section 41(3) of the Arbitration Act to dismiss the claims brought in the arbitration. After finding that there was inordinate and inexcusable delay, the tribunal rejected the contention that there was a substantial risk of unfairness, as it was “satisfied that, despite the inevitable deterioration of the factual witnesses’ recollection, [it] would be able to reach a safe decision, notwithstanding the delay” (para. 15). It concluded, however, that the inordinate and inexcusable delay had caused serious prejudice to Hyundai, as it had resulted in a significant increase in costs defending the claim (para. 16).

III. Procedure for Striking Out Stale Claims in Arbitration

As mentioned in the C. Ambrose et. al., London Maritime Arbitration (2018) textbook (paras. 14.34-14.36), when an application for an award dismissing the claim is made pursuant to section 41(3) of the Arbitration Act, normally both parties would serve detailed written submissions, along with relevant documentation and, possibly, affidavits or witness statements.

A decision or agreement can then be reached in terms of whether the application should be dealt with on the basis of documentary evidence alone or in an oral hearing, be it in person or virtual, given that virtual hearings have become commonplace since the COVID-19 pandemic.

The arbitral tribunal’s decision will normally take the form of an award, including an order for costs. If an award is made dismissing the claim, then both the costs of the application to dismiss, as well as the costs of the arbitration, will usually be awarded to the successful respondent.

IV. Possible Outcomes of Application to Strike Out Stale Claims in Arbitration

If Claims Are Struck Out for Want of Prosecution, They Cannot Be Reintroduced: As mentioned in the National Report for England and Wales (2019 through 2020) (p. 29), an award dismissing a claim for want of prosecution under Section 41(3) of the Arbitration Act will bind the recalcitrant claimant and prevent the claim from being referred again to arbitration, which is logical, otherwise, the whole purpose of Section 41(3) of the Arbitration Act would be defeated.

Tribunal’s Discretion to Take Less Radical Measures, Instead of Striking Out a Claim: In the C. Ambrose et. al., London Maritime Arbitration (2018) textbook (para. 14.17), it is also suggested that, instead of dismissing a claim, the tribunal can take less radical measures, such as, to “penalise the claimant by depriving it of part of its costs, or ordering it to pay costs on an indemnity basis” or “exercise its discretion against allowing interest that could otherwise be awarded” or “impos[e] conditions on the future conduct of the claim“. The possibility of taking less drastic measures is also mentioned in Grindrod Shipping v. Hyundai [2018] EWHC (para. 11).

In summary, arbitral tribunals do have discretion to strike out stale claims for want of prosecution under Section 41(3) of the 1996 Arbitration Act, when a claimant has initiated arbitration yet waited a long period to actually pursue it, without a valid excuse such as ongoing settlement negotiations.

Also, typically, claims will not be dismissed if the limitation period has not yet expired, and reasonably so, since until such period expires a claimant has the right to initiate new proceedings.

In any case, however, once an arbitration is initiated, parties are advised to pursue their claims in a timely manner, in order to avoid having to engage in procedural fights in this respect and thereby save valuable time, effort and costs.