In December 2017, the Fédération Internationale Des Ingénieurs-Conseils, more commonly known as FIDIC, released a revised version of the FIDIC Conditions of Contract (Second edition)(the “2017 FIDIC Contracts”),[1] introducing some notable changes to the dispute resolution mechanism in comparison to the well-worn 1999 edition.[2]

The 2017 FIDIC Contracts maintain the already well known multi-tiered approach to dispute resolution, insisting on a variety of alternative dispute resolution (“ADR”) tools and promoting attempts to identify and resolve issues between the parties early on, prior to resorting to arbitration as a remedy of last resort.

The 2017 FIDIC Contracts retain the same core structure of the Dispute Adjudication Board (“DAB”) as a mandatory pre-condition to arbitration, even though the name “DAB” was changed to the “Dispute Avoidance / Adjudication Board”, more commonly known as the “DAAB”.[3]

Other notable changes included, for instance, the inclusion of the Engineer’s determinations, which are not final but are mandatory (with certain exceptions), and a wider scope of responsibilities for the Engineer in general.

The 2017 FIDIC Contracts also make a clear distinction between “claims” (as a request for an entitlement under the Contract) and “disputes” (which arise if a claim is rejected or ignored), dividing them into two separate clauses: Clause 20 (Employer’s and Contractor’s Claims) and Clause 21 (Disputes and Arbitration). 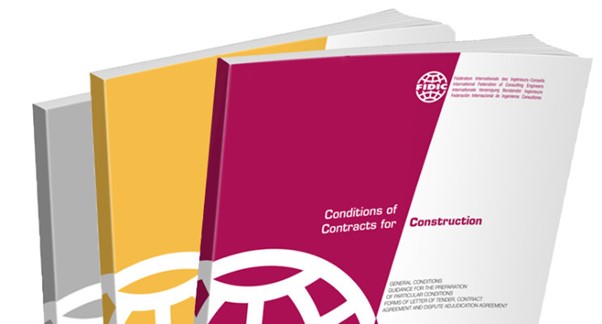 History of the Dispute Resolution Mechanism under FIDIC Contracts

The multi-tiered dispute resolution approach is a long-standing tradition in the FIDIC Suite of Contracts. The DAB was first introduced in 1995 into FIDIC work contracts (the 1995 FIDIC Red Book). In 1999, FIDIC then introduced the DAB as a permanent and mandatory feature prior to resorting to arbitration.[4] More generally, there are two types of DAB’s: (1) the standing board, as provided, for instance, in the 1999 FIDIC Red Book, which is appointed at the beginning of the contract and remains in place until its end; and (2) the ad hoc DAB, which is constituted only once a dispute has arisen (included in 1999 only in the Yellow and Silver FIDIC Contracts).

The 2017 FIDIC Contracts maintained a similar structure and have not changed the pre-arbitration mandatory requirements significantly, providing three mandatory tiers prior to resorting to arbitration:

1. The Engineer’s Determination (which is, however, not included in the 2017 Silver Book);

Tier No. 1: The Engineer’s Determination

The role of the Engineer was expanded in the 2017 FIDIC Contracts (although this was excluded from the Silver Book). The 2017 FIDIC Contracts provide that the Engineer shall first consult with the parties and encourage discussions to try to reach an agreement on the raised claim. If no such agreement has been reached within a 42-day period, or if both parties advise the Engineer that no agreement can be achieved, the Engineer shall make a “fair determination” of the matter or claim considering all relevant circumstances. The Engineer’s determination has to be made within a 42-day period, and it has to be described in detail with reasons and detailed supporting particulars.

Under the 2017 FIDIC Contracts, the Engineer also has a duty to be neutral, which is expressly stipulated in Sub-Clause 3.7 of the 2017 Yellow and Red Books.[5] The Engineer’s determinations are binding on the parties, unless they are revised by the DAAB or in subsequent arbitration.

In fact, the 2017 version of the FIDIC Contracts explicitly provides that the Engineer’s Determination shall become final and conclusive, and immediately enforceable in arbitration, unless a party issues a Notice of Dissatisfaction (“NOD”) with the determination issued by the Engineer within 28 days.[6]

In the event that a party fails to comply with an agreement of the parties under Sub-Clause 3.7 or a final and binding determination of the Engineer, the other party may, without prejudice to any other rights it may have, refer the failure itself directly to arbitration under Sub-Clause 21.6, in which case the first and the third paragraphs of Sub-Clause 21.7 (Failure to Comply with DAAB’s Decision) shall apply to such reference in the same manner as these paragraphs apply to a final and binding decision of the DAAB.

The second tier of dispute resolution is the so-called DAAB, whose primary purpose is for the parties to try to settle the dispute prior to resorting to arbitration (with its typically lengthier and more costly proceedings). Sub-Clause 21.1 of the 2017 FIDIC Contracts sets out the procedures to be followed for the constitution of the DAAB, stipulating that the parties shall jointly appoint the member(s) of the DAAB within the time stated in the Contract. If no such time is provided, they shall appoint the member(s) within 28 days after the date the Contractor received the Letter of Acceptance.[7]

The DAAB must comprise either one member (the “sole member”) or three suitably qualified members (the “members”), with a default number of three, unless the parties have agreed otherwise. In case of the parties’ failure to appoint DAAB member(s), the procedure as provided in Sub-Clause 21.2 applies.

The DAAB shall complete and give its decision within either (a) 84 days after receiving the reference; or (b) such period as may be proposed by the DAAB and agreed to by both parties.[8] Its decision shall be given in writing to both parties, with a copy to the Engineer, shall be reasoned and shall state that it is given under Sub-Clause 21.4.3.[9] The DAAB’s decision is binding but not final since if a party disagrees with the DAAB’s decision, it may provide a NOD, which shall be provided within 28 day after receiving the DAAB’s decision, as provided in Sub-Clause 21.4.4.[10] If the DAAB fails to give its decision within the period stated in Sub-Clause 21.4.3, then either party may, within 28 days after the period has expired, give a NOD to the other party.[11]

The 2017 FIDIC Contracts also introduced a new optional feature, the so-called “Avoidance of disputes” provision, allowing the parties, upon mutual agreement, to jointly request the DAAB to provide assistance and/or informally discuss and attempt to resolve any issue or disagreement that may have arisen during the performance of the Contract. Specifically, Sub-Clause 21.3, reads as follows:[14] 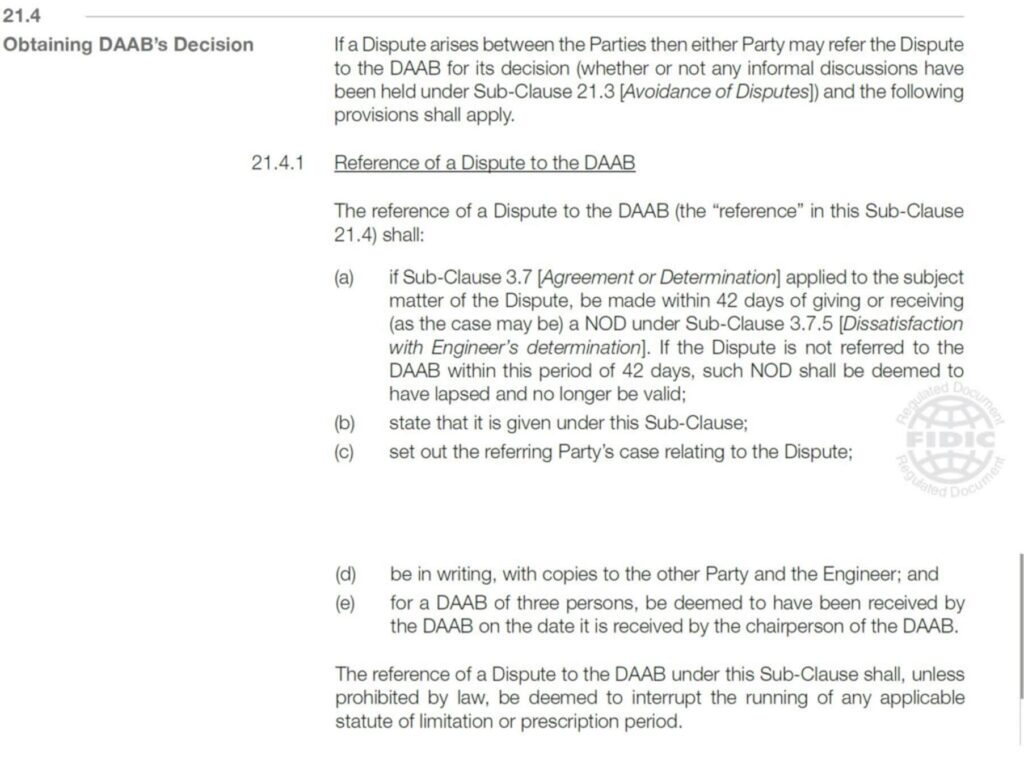 Unless otherwise agreed by the parties:

The 2017 FIDIC Contracts maintained the primary feature of the previous FIDIC Contracts – a mandatory multi-tiered dispute resolution process, entrusting the DAAB both with dispute avoidance and dispute resolution adjudication powers. The amended 2017 FIDIC Contracts also addressed certain ambiguities and problems identified in the previous versions, including a better-defined role of the Engineer. The revised version has further expanded the mandatory procedural steps prior to resorting to arbitration, including the additional 42-day period for the Engineer’s determination and a further 28 days to issue a NOD.

A well-known problem, which has remained since the 2017 FIDIC Contracts, is the enforceability of the DAAB’s decisions in different jurisdictions, and ambiguities regarding what FIDIC’s regime for “binding but not final” and “final and binding” DAAB decisions actually means. Sub-Clause 21.7, for instance, now provides that any failure to comply with the DAAB’s decision may be referred to arbitration without a duty to seek amicable settlement. The question, however, remains what happens in case of a non-final DAAB decision being determined in an arbitration – would an arbitral award enforcing a non-final DAAB decision comply with the requirements of an enforceable award?

Another issue that remains is the legal uncertainty regarding the enforcement of DAAB decisions in different jurisdictions, which, as previously explained in Dispute Boards and International Construction Arbitration, is the most limiting aspect of dispute boards, making the decisions rendered therein less valuable for the winning party than an arbitral award or a court judgement. Issues regarding enforceability raise doubts as to the efficiency of the DAAB’s decisions, and the dispute board system in general.

[2]   For an overview of the FIDIC Suite of Contracts see: https://www.acerislaw.com/fidic-contracts-overview-of-the-fidic-suite/