International arbitration is governed by a cornerstone principle, the principle of consent. This means that parties are free to include, by mutual consent, an arbitration agreement in their contract. By the same token, they can organize such arbitration proceedings by choosing either an ad hoc arbitration or an arbitration administered by an institution. Nonetheless, the ability to reach an agreement has limits, particularly once an arbitration has commenced. This usually happens at the stage of the appointment of arbitrators, especially when the parties are in disagreement regarding the chair of the arbitral tribunal.

In the following paragraphs, we will discuss the particularities of an arbitration institution which often serves as appointing authority, the International Chamber of Commerce (“ICC”). The 2018 Rules of the ICC as an appointing authority in UNCITRAL or other arbitration proceedings (the “2018 ICC Rules”) have been in force since 1 January 2018.

ICC Services as Set forth in the 2018 ICC Rules

The 2018 ICC Rules set forth a series of provisions permitting “the International Chamber of Commerce or any authority within ICC”[5] to act as an appointing authority either in UNCITRAL Arbitration Proceedings[6] or other arbitration proceedings (ad hoc or administered by other arbitral institutions[7]). In addition to serving as appointing authority, the ICC can provide further administrative services in order to facilitate UNCITRAL and Non-UNCITRAL ad hoc arbitration proceedings.

These services are listed in Article 8(1) of the 2018 ICC Rules, which reads as follows:

The Court may provide one or more of the following services, as requested:

Procedure to Select the ICC as Appointing Authority

When the parties have not agreed in their arbitration agreement that the ICC shall act as appointing authority, each Party to an arbitration has a right to send an application to the ICC Secretariat requesting such services. Upon receipt of the application, the Secretariat shall inform the other party/parties. The application is governed by Article 4(1), which reads:

Article 4(2) states that the date of receipt of the application by the ICC Secretariat corresponds to the date on which the ICC is requested to act under the 2018 Rules:

The application shall contain the following information (Article 4(3)):

Costs of the ICC Acting as Appointing Authority

In accordance with Article 12(1) of the 2018 ICC Rules and Article 1 of their Appendix, “each Application shall be accompanied by a non-refundable filing fee” amounting to USD 5,000.00.

The 2018 ICC Rules envisage two methods of pricing for the above-mentioned services (Article 2 of the Appendix): either as a fixed fee for each service provided separately, or as a single fixed fee for multiple services.

The costs for the specific services are quite reasonable and listed in Article 3 of the Appendix as follows: 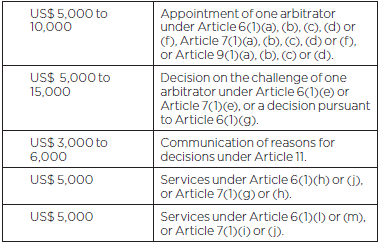 Article 4 of the Appendix provides that, should the Parties opt for a single, fixed fee for multiple services, its amount shall be greater, equal to a range of between USD 90,000.00 and USD 150,000.00.

Article 12(2) of the 2018 ICC Rules provides that “after the receipt of the Application, the Secretary General shall fix an advance on costs”.

Finally, if one or more parties fail to provide payment of their share of advance on costs, “the Secretary General may fix a time limit within which the Applicant or the parties, as the case may be, must comply, failing which the file shall be closed without prejudice to any party’s right to submit the same request at a later date in another Application.” (Article 12(4))

Parties dispose of a right to request the ICC to act as appointing authority at any time. However, to avoid any disagreement in this respect when a dispute has already been crystallized, they may insert the following model clause in their contract ab initio :

The International Chamber of Commerce (‘ICC’) shall act as appointing authority in accordance with the Rules of ICC as Appointing Authority in UNCITRAL or Other Arbitration Proceedings.

[7] For the purposes of the 2018 ICC Rules, Other Institutional Arbitration Proceedings are defined as “arbitration proceedings conducted under the rules of an institution other than ICC”, Article 2(iii).