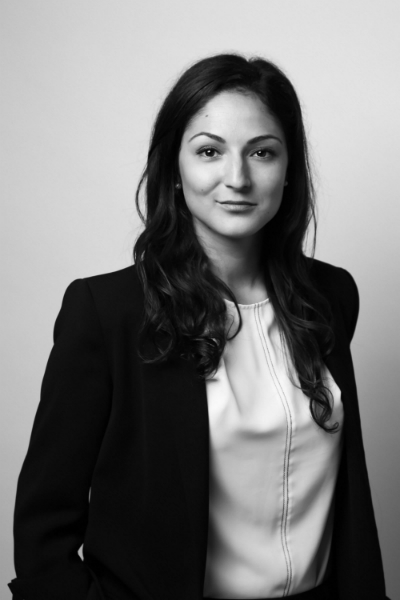 Prior to joining Aceris, she was a Graduate Trainee in the International Arbitration Group of Freshfields Bruckhaus Deringer in Paris and a former intern at the Permanent Court of Arbitration (PCA) in The Hague. She was also a legal intern in law firms in Belgrade and Berlin and a trainee at the German Bundestag and a holder of the International Parliamentary Scholarship (IPS).

Nina speaks English, Serbian/Croatian, Spanish, German and French fluently and has basic knowledge of Portuguese. She is admitted to the Serbian Bar.

Nina represents the clients of Aceris Law LLC under the direction and supervision of the founding partner, William Kirtley. She has worked on various cases under the UNCITRAL, SIAC, SCC, ICC, LCIA, PCA, AAA, ICDR and other arbitration rules, under English law, Bosnian law, Saudi law, Turkish law, Singapore law, Moldovan law, Uzbek law, Angolan law, and public international law, amongst others. Her most recent cases, concluded in favour of Aceris’ clients, include, inter alia, an LCIA arbitration under Saudi law regarding a construction of a desalination plant in the Middle-East, an UNCITRAL ad hoc arbitration involving a construction of a water distribution network in Angola, and a SIAC arbitration under Singapore law regarding construction of a desalination plant in Oman. She has also represented a publicly-listed Malaysian company in a USD 400 million dispute involving a natural gas construction project in Uzbekistan against a subsidiary of a Russian multinational company in the oil and gas sector. She has also represented a Greek construction company in an UNCITRAL arbitration administered by the PCA against a Bosnian State agency involving the construction of a wastewater treatment plant governed by Bosnian law. Nina also contributes to diverse publications on international commercial, construction and investment arbitration.

As a graduate trainee during her six-month traineeship, Nina worked on various public international law, investment law and commercial law cases. Nina was primarily working on a public international law case for a submission for International Court of Justice (ICJ) relating to a dispute between two Latin American states. Nina also helped with the translations of documents and evidence to and from Spanish, German and Serbian. During her traineeship, Nina was also involved in an investment law case against ex-Soviet Republic, commercial law cases under the LCIA and ICC rules, and a successful ICC Challenge of an Arbitrator.

Permanent Court of Arbitration (the PCA), the Hague, the Netherlands – Legal Intern

During her internship at the PCA, Nina was involved as a case administrator in a number of public international law and investment law cases, examples of which include a maritime boarder issue between two Balkan States, a confidential case against an international organization, a case brought against Russia in relation to violations of environmental and maritime law.  Nina helped with the organization of the hearings and conferences, assisted tribunals throughout different stages of arbitral proceedings and assisted with correspondence between the parties and tribunals.

Nina worked for five months in the office of an SPD Parliamentarian. Nina organized and attended meetings and conferences, prepared legal briefings and drafted memoranda and notes in German.

Nina was focused primarily on Serbian Company and Business law, was involved in the founding of a company and the restructuring of a major Serbian company in the pharmaceutical industry, and assisted with Serbian court proceedings and the litigation of commercial disputes.

Worked in the German language on various insolvency law, family law and inheritance law cases. She was also involved with EU law and EU enforcement proceedings.