Under all major institutional arbitration rules, the parties are requested to pay deposits for the arbitration in equal shares. If one party refuses to comply with this payment obligation, however, often the respondent, the other party generally has no choice but to bear the advances on costs alone.

Due to this fact, non-payment of advances on costs is a tactic that is increasingly abused by certain parties in international arbitration, typically respondents, to deter the other party from pursuing their claims, especially when one party is known to be facing financial difficulties.

The tactic’s aim is for the other party to withdraw its claims, due to the increase in the advance on costs the other party will be required to pay. While this tactic often backfires, as arbitral tribunals generally frown upon one party’s non-payment of advances on costs, in direct violation of procedural rules, this has not prevented this tactic from being increasingly used in an attempt to stifle claims.

The present post aims to explore the remedies available when one party defaults on its obligation to pay its share of the advance on costs, under major institutional arbitration rules.

Non-Payment of the Advance on Costs Under the ICC Rules

The arbitration rules of the International Chamber of Commerce in force as from 1 January 2021 (the “ICC Rules”) refer to the advance to cover the costs of the arbitration in Articles 37 and 38.[1]

As under most arbitration rules, Paragraph 2 of Article 37 of the ICC Rules specifies that “the Court shall fix the advance on costs in an amount likely to cover the fees and expenses of the arbitrators” and the “advance on costs fixed by the Court pursuant to this Article 37(2) shall be payable in equal shares by the claimant and the respondent.”

If one party fails to pay its share of the advance on costs, the ICC Rules provide for several remedies.

First, the other party may pay the other party’s share of advances on costs (Article 37(5) of the ICC Rules). It may generally request these payments to be reimbursed in a subsequent award on costs.

Second, after consultation with the arbitral tribunal, the Secretary General may instruct the arbitral tribunal to “suspend its work and set a time limit, which must be not less than 15 days, on the expiry of which the relevant claims shall be considered as withdrawn.” For instance, if it is the respondent that fails to pay its share, any counterclaims would be withdrawn but not its defences to the claimant’s claims. This remedy is limited insofar as the party failing to pay “shall not be prevented, on the ground of such withdrawal, from reintroducing the same claims at a later date in another proceeding” (Article 37(6) of the ICC Rules).

Even in the absence of a partial award on costs, however, pursuant to Article 38(4) of the ICC Rules, “The final award shall fix the costs of the arbitration and decide which of the parties shall bear them or in what proportion they shall be borne by the parties.” Arbitral tribunals will typically take into account the fact that one party refused to pay the advance on costs, when making their decision on costs.

The Hong Kong International Arbitration Centre (the “HKIAC”) takes a similar approach to the ICC regarding payment and non-payment of the advances on costs in its rules, while explicitly providing that the party paying in the place of the non-paying party may request a separate award for reimbursement of payment.[3] Pursuant to Articles 41.4 and 41.5 of the 2018 HKIAC Procedures for the Administration of International Arbitration:

41.5 If a party pays the required deposits on behalf of another party, the arbitral tribunal may, at the  request of the paying party, make an award for  reimbursement of the payment.

Non-Payment of Advances on Costs under the ICDR Rules

Article 39 of the International Arbitration Rules of the International Centre for Dispute Resolution (the “ICDR Rules”) also explicitly provides for the arbitral tribunal to render a separate award in respect of the non-payment of the advances on costs, while entitling the paying party to interest: 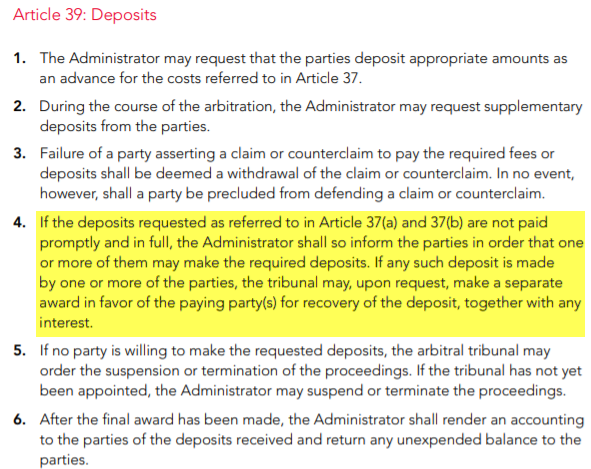 Non-Payment of the Advances on Costs under the LCIA Rules

Contrary to the ICC Rules, under the arbitration rules of the London Court of International Arbitration (the “LCIA Rules”) advances on costs are addressed to the parties from time to time.[4]

With regard to non-payment by a party of advances on costs, it comes as no surprise that the LCIA Rules contain a provision nearly identical to the ones in other institutional rules (Article 24.6 of the LCIA Rules), allowing the other party to pay in the place of the non-paying party:

24.6 In the event that a party fails or refuses to make any payment on account of the Arbitration Costs as directed by the LCIA Court, the LCIA Court may direct the other party or parties to effect a further Advance Payment for Costs in an equivalent amount to allow the arbitration to proceed (subject to any order or award on Arbitration Costs).

However, the paying party is also explicitly entitled to request an order or award in order to recover the amount paid as debt, together with interest, from the defaulting party:

24.7 In such circumstances, the party effecting the further Advance Payment for Costs may request the Arbitral Tribunal to make an order or award in order to recover that amount as a debt immediately due and payable to that party by the defaulting party, together with any interest.

Conclusion on Non-Payment of Advances on Costs

When a party refuses to pay its share of the advances on costs, institutional rules provide for the arbitral tribunal, or the institution itself, to direct the failing party to make a substitute payment, failing which the proceedings may be suspended or claims/counterclaims may be considered withdrawn.

The parties shall, however, bear in mind that not all institutional rules explicitly empower arbitral tribunals to issue a partial award that orders the reimbursement of an advance on costs the other party refuses to pay, although this is becoming increasingly common.

Also, in the short-term, the paying party generally has no choice but to pay for the arbitration on behalf of the non-paying party, whose counterclaims will typically be unable to continue (even if they are reframed as set-off claims, if they require the arbitral tribunal to consider additional matters).

While the non-paying party’s costs that were paid may typically be recovered in the final award, when preparing an arbitration budget, parties should keep in mind that the other party may refuse to pay its share of the advance on costs, in order to seek a tactical advantage.