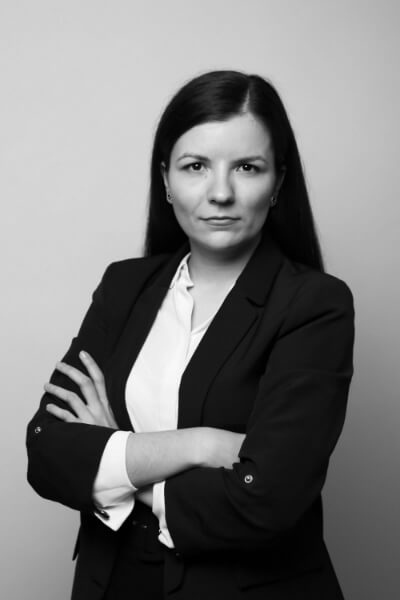 Zuzana, a Slovak native, is a French-educated investment arbitration lawyer who is registered at the Paris Bar. She also has significant experience with international commercial arbitrations. She joined Aceris Law in 2017. She speaks English, French, Slovak and Czech fluently and has basic knowledge of Russian.

Zuzana holds an LLM in International Economic Law from the Sorbonne University in Paris and an LLM in Litigation, Arbitration and Alternative Dispute Resolution Modes from the University of Paris 2 – Panthéon-Assas. During her studies, she wrote two master theses: on Procedural Treaty Shopping in Investor-State Arbitration and on Anti-suit Injunctions in ICSID Arbitration. Representing the Paris Bar School, she participated in the 12th edition of the Paris International Arbitration Moot Competition organised by Sciences Po and reached the final rounds.

Zuzana previously performed a twelve-month internship at Shearman & Sterling, in Paris, where she was involved in a number of ICSID, UNCITRAL and ICC cases. She also assisted in the Project directed by the UNCITRAL Secretariat related to the www.newyorkconvention1958.org website and the Guide on the Convention on the Recognition and Enforcement of Foreign Arbitral Awards.

Zuzana performed her final internship at Rasseck Bourgi’s office. She was involved in an UNCITRAL investment arbitration concerning a real-estate project, the enforcement of an ICSID award rendered in the aviation industry, an ICC arbitration relating to a construction dispute and multiple OHADA cases.

Zuzana represents the clients of Aceris Law SARL under the direction and supervision of the founding partner, William Kirtley. She works on various cases under the ICC, LCIA and ICSID rules of arbitration. She also deals with cases governed by French or Swiss law or concerning French-based legal systems (such as arbitrations involving French-speaking West Africa countries). She contributes to diverse publications on international commercial and investment arbitration.

Zuzana worked on an UNCITRAL investment arbitration concerning a real-estate project; on an enforcement of an ICSID award rendered in the aviation industry; and on an ICC arbitration relating to a construction dispute. She provided in-depth legal research on public international law, investment arbitration, French law and OHADA law issues.

During her twelve-month internship in international arbitration department, Zuzana intervened in multiple ICSID, UNCITRAL and ICC cases including, inter alia, mining arbitrations and construction disputes. She was also involved in enforcement of foreign awards proceedings in France. She assisted in the Project directed by the UNCITRAL Secretariat related to www.newyorkconvention1958.org website and the Guide on the Convention on the Recognition and Enforcement of Foreign Arbitral Awards. She also helped with the translations of documents and evidence to and from French, English, Slovak and Czech.

Bachelor of Laws and Master 1 in French Private Law

Getting the Deal Through Author

Young Practitioners Group under the auspices of AIAC