On 7 May 2019, the arbitral tribunal in Eskosol S.P.A in Liquidazione v Italian Republic [1] took a position on various issues concerning ECT arbitration following the judgment of the CJEU in Slovak Republic v. Achmea (“Achmea“). The decision addressed a request filed on 4 February 2019 by the Italian Republic for an award declaring immediate termination of the ECT arbitration. Italy sought dismissal of all claims brought by Eskosol S.p.A in liquidazione based on the Declaration dated 15 January 2019 by 22 Member States of the European Union, entitled “Declaration of the Governments of Member States on the legal consequences of the judgment of Court of Justice in Achmea and on investment protection in the European Union”. 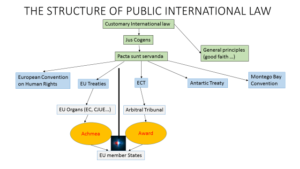 The arbitrators also explained, providing the diagram above, that Achmea is irrelevant to the ECT because EU Organs and Arbitral Tribunals derive their jurisdiction separately, from different Treaties, and EU Treaties do not prevail over the ECT as a matter of public international law.

While the Eskosol decision is in line with the clear trend of arbitral jurisprudence asserting jurisdiction over intra-EU ECT arbitrations,[9] it sheds light on arbitral tribunals reasoning considering EU Member States Declarations, and it remains to be seen how EU Member States will implement the measures contained in their declarations, and how enforcement proceedings of such arbitral awards will evolve.