This annual update provides an overview and comparison of the rankings of the best international arbitration law firms in the Legal 500, Chambers and Partners, GAR and Leaders League in 2019, which continue to reflect trends such as the growing number of smaller, boutique arbitration practices, such as Aceris Law, finding their own place in the upper echelons of an increasingly competitive global legal market.

Both the Legal 500 and Chambers were established in the late 1980’s, providing the first global “research directory” of lawyers, adding to more traditional mechanisms of finding qualified lawyers, such as by word of mouth. In the field of international arbitration, more recent upstarts such as the Leaders League (founded in 1996 in Paris, France), Law 360 (founded in 2003, now owned by Lexis Nexis) and the Global Arbitration Review (founded in 2006) have also established newer rankings of the top international arbitration law firms and practice groups.

We briefly identify the ranking methodology used by each research directory, prior to providing an overview of the latest results.

The Legal 500 has long-provided rankings of the best international arbitration law firms and practice groups. Primary factors taken into account by the Legal 500’s rankings include recent work and the firms’ historical track record (over the past 3-5 years). However, the rankings also take into account the breadth of practice and coverage, the breadth of industry sector coverage, the experience of the team, client feedback, significant market and economic developments and “other” factors. As the Legal 500 does not publish ranking information for the world as a whole, we shall examine rankings in London and Paris, two traditional hubs of international arbitration. 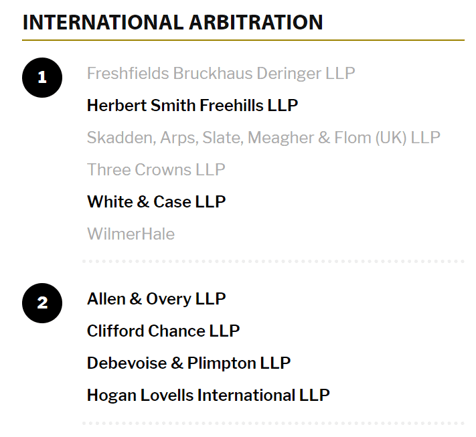 The list is slightly different with respect to the top arbitration practices in Paris although there is overlap. The top-rated firms are Cleary Gottlieb Steen & Hamilton, Quinn Emanuel Urquhart & Sullivan, LLP, Shearman & Sterling LLP and White & Case LLP. Interestingly enough, pursuant to the 2019 ranking, half of the firms in second place are boutiques, while Freshfields Bruckhaus Deringer LLP dropped from first place last year to second place this year. Another Legal 500-ranked arbitration boutique is Aceris Law. 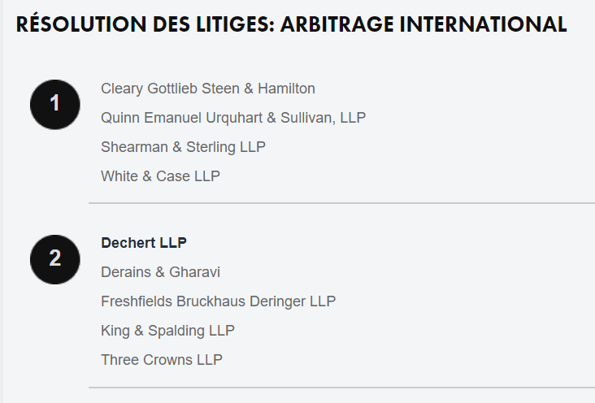 Another global ranking of international arbitration law firms worldwide is provided by Chambers and Partners, based in London. Law firms and individuals are ranked in different Bands from 1-6. Rankings are based on technical legal ability, professional conduct, client service, commercial astuteness, diligence, commitment and other qualities. Chambers and Partners also contacts previous clients (selected by the law firm being reviewed) in order to determine their opinion on firms and lawyers. Based on the abovementioned criteria, the ranking of best arbitration law firms in 2019, globally, as available on their website, is as follows:

The law firms ranked in Band 1 in 2019 include Debevoise & Plimpton LLP, King & Spalding LLP and White & Case LLP. These are followed by Freshfields Bruckhaus Deringer LLP, Herbert Smith Freehills, Shearman & Sterling LLP and WilmerHale in Band 2. A more detailed overview of each of the abovementioned law firms, their strengths and work highlights, as well as notable practitioners and most important clients, can be found on Chambers and Partner’s website. 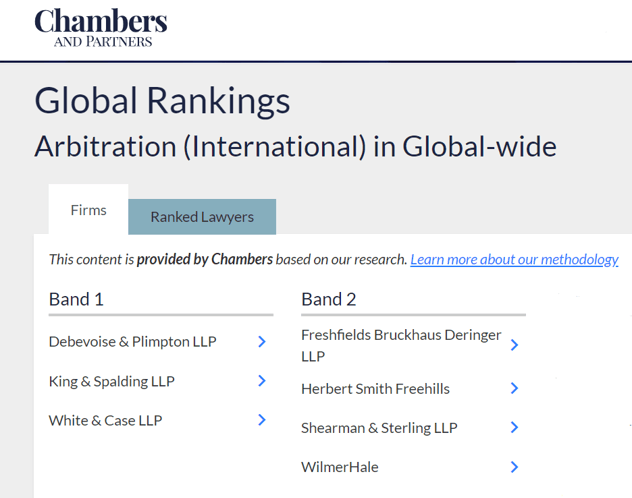 In comparison to other rankings, such as those of GAR and the Legal 500, Chambers and Partners puts more emphasis on individual outstanding lawyers, also divided into Band 1-5. While two lawyers ranked as Star Individuals are Gary Born and Emmanuel Gaillard, who are both highly respected in the field of international arbitration, many noticeable leading arbitration practitioners are missing.

The Leaders League, founded in Paris, also provides for a ranking of international arbitration law firms based on individual countries. Criteria taken into consideration for this ranking include the reputation of the firm, its size, the seniority of its partners, its managing directors, the level of education of associates, the number, prestige and diversity of the firm’s cases and growth in the firm’s turnover.

In the listing of leading French law firms in International Arbitration in 2019, in first place are Dechert, Shearman & Sterling and White & Case, followed by Bredin Prat, Freshfields, Quinn Emanuel Urquhart & Sullivan and Three Crowns. The ranking further provides for a list of other recommended law firms, including smaller arbitration boutique practices such as Aceris Law. 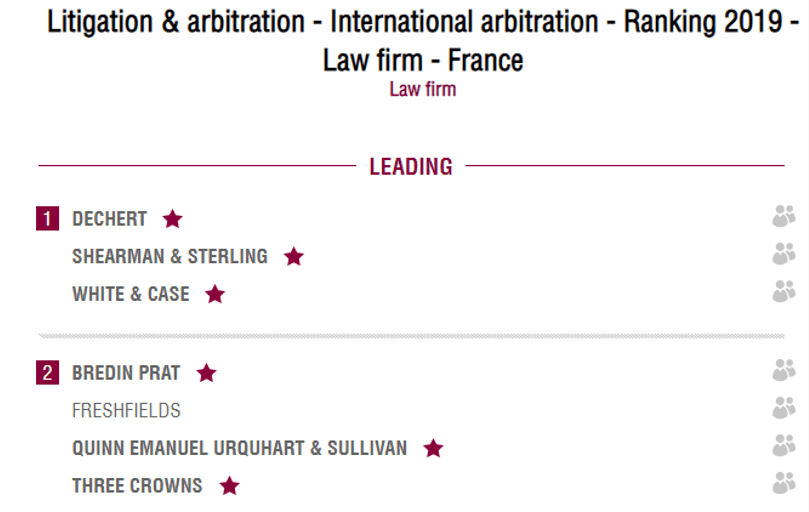 While the Global Arbitration Review is the newest entrant in terms of lawyer and law firm rankings, the GAR 30 and GAR 100 also provide rankings of leading firms. The GAR 30 is an overview of the thirty “busiest” arbitration practices, generated from the size and number of disputes argued in the past two years. The methodology used by GAR is a rather complex method of comparison of the following:

The most recent GAR 30 rankings for 2019 are available online and may be accessed on GAR’s website here. White & Case LLP holds the first place, immediately followed by King & Spalding and Freshfields Bruckhaus Deringer LLP in third position. This year Hogan Lovells and Allen & Overy dropped out of the top 10, while Clifford Chance and Debevoise & Plimpton ranked slightly higher than they used to.

Best International Arbitration Law Firms: What to Make of the Rankings?

The above comparison demonstrates that more or less the same large, international law firms dominate the upper echelons of the rankings in Chambers and Partners, the Legal 500, the Leaders League and the GAR 30, with White & Case LLP, Freshfields Bruckhaus Deringer LLP and Shearman & Sterling LLP leading the head of the pack, as has often been the case over the past two decades.

While one may take issue with certain factors used in the rankings, such as taking the number of hours billed to clients as a sign of quality, there is no doubt that leaders in the field, such as White & Case LLP, Freshfields Bruckhaus Deringer LLP and Shearman & Sterling LLP, have a number of highly-gifted arbitration practitioners, and such large corporate firms may be an appropriate choice for large international arbitration cases, since the fees charged will comprise a proportionally smaller portion of the amount in dispute.

One must not, however, neglect arbitration boutique firms, which are increasingly making a dent in the upper echelons of international arbitration law firm rankings. The boutique law firm with the most name recognition over the past few years is surely Three Crowns, founded in April 2014 by six partners who were practicing at some of world’s top international arbitration law firm practice groups, including one of the best-known arbitrators, Jan Paulsson, the former head of international arbitration group of Freshfields Bruckhaus Deringer LLP. It also cannot be denied that smaller boutique practices are slowly but surely making their own way to the top. Part of this is may be economic in nature, as some, but by no means all, boutique practices charge less than other law firms in terms of legal fees (only the arbitration boutique Aceris Law is explicitly founded on the principle of offering the highest-quality legal representation at more competitive rates).

While large corporate law firms will surely remain at the top of the rankings over the coming years, due to the manner in which rankings are performed, the rise of arbitration boutiques continues.