The volume of cross-border commercial transactions conducted electronically is growing inexorably from year to year. Companies around the world are also increasingly using new electronic contracting tools. Many legal questions have arisen against the background of this paperless process concerning the enforceability of electronically-signed documents. 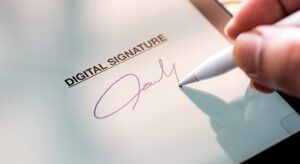 The electronic conclusion of arbitration agreements raises some issues concerning the formal requirements of the provisions of the Convention on the Recognition and Enforcement of Foreign Arbitral Awards (“New York Convention”). Pursuant to Article 2(1) of the New York Convention:

Each Contracting State shall recognize an agreement in writing under which the parties undertake to submit to arbitration all or any differences which have arisen, or which may arise between them in respect of a defined legal relationship, whether contractual or not, concerning a subject matter capable of settlement by arbitration.

In accordance with Article 2(2) of the New York Convention, the term “in writing” shall include an arbitral clause in an arbitration agreement, signed by the parties or “contained in an exchange of letters or telegrams”. The UNCITRAL Model Law, as revised in 1985, includes a similar requirement about the need for a written agreement.

These long-standing requirements are of course no longer in line with today’s realities. The drafters of the New York Convention considered the exchange of letters or telegrams to be modern, as they were in 1958. As a result, they failed to anticipate that electronic exchanges would become a regular part of everyday commercial transactions.

However, under modern laws the means of proving consent may be broader than those expressly mentioned in the New York Convention.

Recognition of E-Signatures in Arbitration Agreements

Following this trend, the UNCITRAL Model Law, as revised in 2006, allows for the conclusion of an arbitration agreement in electronic form.

The 2005 United Nations Convention on the Use of Electronic Communications in International Contracts also implements this recognition by providing that “a communication or a contract shall not be denied validity or enforceability on the sole ground that it is in the form of an electronic communication.” The only problem is that most States have not ratified it yet.

Moreover, several approaches aim to recognize and enforce electronic arbitration agreements, such as a broader interpretation of Article 2 of the New York Convention and reliance on the most favourable law principle.

The first approach is to interpret Article 2 broadly to include arbitration agreements concluded in communications other than an exchange of letters or telegrams. According to the ICCA’s Guide to the Interpretation of the 1958 New York Convention, p. 50, electronically-signed arbitration agreements should be considered to be enforceable, although the Convention itself does not support the exchange of unsigned documents:

The wording of Article II(2) was intended to cover the means of communication that existed in 1958. It can be reasonably construed as covering equivalent modern means of communication. The criterion is that there should be record in writing of the arbitration agreement. All means of communication that fulfil this criterion should then be deemed as complying with Article II(2), which includes faxes and e-mails.
With respect to e-mails, a conservative approach indicates that the written form under the Convention would be fulfilled provided that signatures are electronically reliable or the effective exchange of electronic communications can be evidenced through other trustworthy means. This is the approach that has been endorsed by UNCITRAL in its 2006 amendment of the Model Law […].

Tips for the Effective E-Signing of Arbitration Agreements

The enforceability of the electronic signature requires proof that the party intends to be bound by the terms and conditions of the agreement. There are many ways to sign a document electronically. The main evidence that the agreement was signed properly are the following:

Alternatively, of course, the parties may also sign their arbitration agreement in wet ink.