The economic disruption caused by the COVID-19 pandemic is expected to lead many corporations to insolvency, as well as trigger an increase in the number of commercial disputes. Consequently, it is likely businesses will have to face more arbitrations with insolvent entities, or arbitrations brought by bankruptcy trustees, when the right to maintain and dispose of assets of the bankruptcy estate belongs solely to the bankruptcy trustee.

Insolvency and arbitration serve conflicting purposes, so when the two regimes intersect, several issues usually arise. Below, we address some of the common questions and concerns businesses have in terms of the effects of insolvency on arbitration. 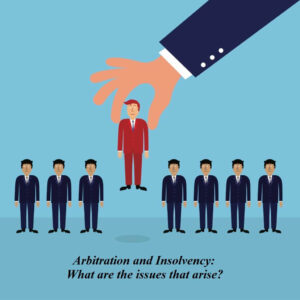 The Inherent Tension Between Insolvency and Arbitration

The relationship between insolvency and arbitration is often characterised as “a conflict between near polar extremes.”

This phrase aptly encapsulates the inherent tension between the two regimes.

In a nutshell, that is because:

The conflict that arises when insolvency and arbitration collide boils down to the following question:

When commercial parties have agreed by contract that certain disputes between them will be resolved privately by arbitration, but a later change in circumstances finds one of them unable to pay its debts, so that the state itself is obliged to intervene to preserve public order, what will happen to the insolvent party’s original and binding commitment to have its disputes settled by arbitration?

What Are the Issues that Arise When Insolvency and Arbitration Intersect?

To begin with, various factors must be taken into account when considering the practical implications of an insolvency on arbitration, which include:

Prior to examining how these issues are addressed by arbitrators and domestic courts, it is important to provide an overview of the regulatory framework governing insolvency proceedings.

Each country has its own set of insolvency laws, which have different names and are mandatory in nature, since public policy interests are at stake and multiple private parties are usually affected when a business becomes unable to pay its debts.

It is important to keep in mind, however, that the effect of such laws is usually limited to the jurisdiction in question (the territorial scope of the national insolvency laws).

Despite the existing differences between various domestic insolvency regimes, certain common objectives can be identified, which include:

These objectives are attained via mandatory domestic laws, which usually alter general contract law principles by temporarily limiting the contractual freedom of the debtor for the public good, to the effect that:[2]

There are variations on this general framework, however, for instance with respect to the 2015 EU Recast Regulation on Insolvency Proceedings.

In the context of an increasingly globalised economy, an insolvency of a business does produce practical effects in more than one country and this is a reality that could not be overlooked by regulators.

The confict-of-laws rule under Article 7 of the Regulation gives extraterritorial effect to the law of the country where the insolvency proceedings are commenced.

1. Save as otherwise provided in this Regulation, the law applicable to insolvency proceedings and their effects shall be that of the Member State within the territory of which such proceedings are opened (the ‘State of the opening of proceedings’). 2. […]

An important exception to this rule is established in Article 18 of the Regulation which provides that the law of the arbitral seat shall govern the effects of insolvency on a pending arbitration.

The effects of insolvency proceedings on a pending lawsuit or pending arbitral proceedings concerning an asset or a right which forms part of a debtor’s insolvency estate shall be governed solely by the law of the Member State in which that lawsuit is pending or in which the arbitral tribunal has its seat.

Recital 73 of the Regulation repeats the wording of Article 18, followed by the addition that “this rule should not affect national rules on recognition and enforcement of arbitral awards.”

There is, unfortunately, no consistency in terms of how arbitrators and courts handle (nor consensus in terms of how they should handle) the various issues that arise when insolvency and international arbitration clash.

The first point to be made is that in the context of an international arbitration, several complex conflict-of-laws issues also usually arise and decision-makers are called to make important policy considerations in order to render an enforceable award.

That is because arbitrators are not attached to any forum (in legal terms, they have no lex fori, as national courts do) thus, all national laws, including the mandatory national insolvency laws discussed herein, are considered, at least conceptually, foreign to them. In reality, however, in order to ensure that an enforceable award will be rendered, arbitrators do need to respect the mandatory rules of the seat of the arbitration, especially when the distressed party is (or it is about to be) declared insolvent there. Otherwise, they risk that the award will be set aside and refused recognition and enforcement at the seat of the arbitration on public policy grounds.

Under the 1958 United Nations Convention on the Recognition and Enforcement of Foreign Arbitral Awards (the “NYC”), which is the primary reference guide for ensuring the success of any international arbitration, there are two limbs of public policy grounds that can be raised to block recognition and enforcement of an award rendered in violation of insolvency laws, i.e.:

The overall pro-enforcement bias flowing from the NYC, however, mandates that these two provisions are interpreted restrictively, and domestic courts should bear that in mind when making a decision to recognise and enforce an arbitral award rendered in the context of an international arbitration which clashes with a foreign insolvency.

Further, practice shows that international tribunals generally acknowledge parallel insolvency proceedings and do try to integrate them into the arbitral process.[3] This means that the opening of insolvency proceedings does not necessarily frustrate the parties’ agreement to arbitrate their disputes. Nor does it make the subject matter in dispute necessarily non-arbitrable, considering that usually only very “core” issues, such as the insolvency proceedings themselves, are excluded from the arbitration realm and entrusted purely to domestic courts. The content of the award might also be modified (from monetary to declaratory) to make sure that the purpose of an insolvency (for example, the protection of the equality of creditors) is not defeated.

To reconcile both regimes, certain modifications to the conduct of the proceedings are normally necessary, such as granting reasonable extensions of time, taking into account that every decision made by the insolvent party may be subject to a series of authorisations. While some delays may be warranted to respect due process, there is also a very thin line between a genuine difficulty of the insolvent party to participate in the arbitration proceedings and dilatory tactics intended to frustrate them.

Further, if the insolvency proceedings are still ongoing, the distressed party is arguably not deprived of its capacity to appear before tribunals (and courts). Instead, its capacity to do so is merely transferred to and upheld by the trustee. Only entities that, upon liquidation and distribution of their estate, cease to exist (and are deleted from commercial registries) arguably lose their legal capacity entirely.

Insolvency and arbitration are different in nature, so when they meet a variety of issues do arise. Practice shows that reconciliation between the two regimes is possible. There is no consistency in terms of the way tribunals and courts have dealt with these issues, however.