Below, we explore the formation of customary international law under the Statute of the International Court of Justice (ICJ), to then analyse its role in investment arbitration.

The Formation of Customary International Law 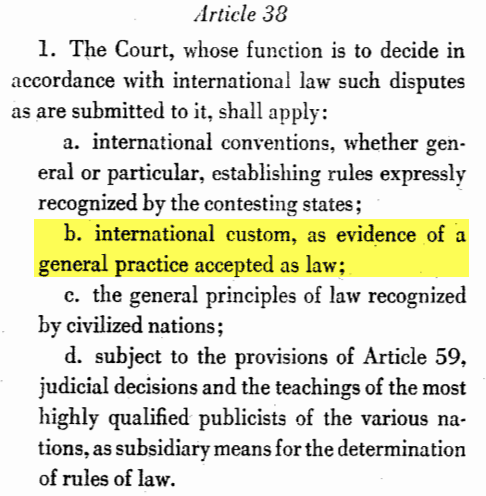 Thus, customary international law is formed over time based on (i) the consistent practice of States’ representatives who (ii) believe that they are bound by such a practice (opinio juris).[1]

In the oft-cited North Sea Continental Shelf Cases, in which the ICJ analysed 15 cases related to boundaries’ delimitations, States’ practice was held as an objective criterion, which must be:[2]

Interestingly, with respect to duration, the ICJ did not set any fixed time limit. Rather, it noted that “the passage of only a short period of time is not necessarily, or of itself, a bar to the formation of a new rule of customary international law”.[3]

Opinio juris is understood as the “subjective” element of a custom under international law.[4] In this respect, States must be convinced that a practice is required or permitted under international law.[5] As explained by the ICJ in Military and Paramilitary Activities in and against Nicaragua, opinio juris depends on a belief that the practice is required:[6]

[F]or a new customary rule to be formed, not only must the acts concerned ‘amount to a settled practice’, but they must be accompanied by the opinio juris sive necessitatis. Either the States taking such action or other States in a position to react to it, must have behaved so that their conduct is ‘evidence of a belief that this practice is rendered obligatory by the existence of a rule of law requiring it. The need for such a belief. i.e., the existence of a subjective element, is implicit in the very notion of the opinio juris sive necessitatis. (I.C.J. Reports 1969, p. 44, para. 77.)

While customary international law is usually invoked as a secondary rule in investment arbitration, some tribunals have considered it as a self-standing source for a claim.

In Cambodia Power Company v. Cambodia, arising out of different power purchase agreements, governed by English law and entered into with public entities in Cambodia, the investor brought claims for the respondents’ alleged breach of the agreements and violation of “principles of international law”.[7]

While the investor did not specify the breaches on which it intended to base its claim, the arbitral tribunal considered that the investor indicated a breach based on customary international law, including a possible claim for expropriation.[8]

Despite Cambodia’s objection, the tribunal upheld jurisdiction over the investor’s claim under customary international law on the following basis:[9]

In this regard, the tribunal also noted that “the express choice of English law itself has the effect of including (rather than displacing) at least a body of customary international law, since customary international law (i.e. general practices of states followed by them from a sense of legal obligation) constitutes part of the Common law by a well established doctrine of incorporation.”[10]

In conclusion, the tribunal observed that customary international law was inevitably relevant in the context of investment arbitration disputes as “a body of norms that establish minimum standards of protection”:[11]

In Emmis v. Hungary, arising out of Hungary’s BITs entered into with Switzerland and the Netherlands, the claimants brought a claim for expropriation on the basis of customary international law.[12]

Hungary objected to the claim under Rule 41(5) of the ICSID Arbitration Rules on the basis that it was “without legal merit”, alleging that it had not consented “to arbitration of claims arising from stand-alone obligations under customary international law”.[13]

The Emmis tribunal emphasized the scope of the parties’ consent, rather than the applicable law to the dispute.[14] Thus, the tribunal considered that the dispute resolution clause in the Netherlands BIT (Article 10) was broad enough to include a claim for expropriation under customary international law, while the Switzerland BIT did not allow a self-standing claim on the basis of customary international law:[15]

Article 10 of the Switzerland BIT is, by its terms, limited in the absence of other consent, to ‘[a] dispute concerning Article 6 of this Agreement’. Article 6 contains the Treaty stipulation in relation to expropriation. This instrument of consent is therefore not wide enough to encompass a separate claim of breach of the customary international law standard of expropriation […].

However, Article 10 of the Netherlands BIT, on which Claimants have specifically relied in their recent submissions, refers generally to ‘[a]ny dispute between either Contracting Party and the investor of the other Contracting Party concerning expropriation or nationalization of an investment.’ Article 10 is not expressly linked to Article 4(1), which sets forth the treaty standard relating to expropriation. Indeed, Article 4(1) does not use the expression ‘expropriation or nationalization’ at all. Instead, it refers functionally to ‘measures depriving, directly or indirectly, investors of the other Contracting Party of their investments’. At this point, the Tribunal does not decide whether the consent to arbitrate ‘[a]ny dispute … concerning expropriation or nationalization of an investment’ in Article 10 of the Netherlands BIT is necessarily limited to disputes founded upon Article 4(1). Expropriation and nationalization are terms that may also properly refer to the standards of customary international law, where such concepts have been widely considered and applied.

The Relevance of Arbitral Awards

[An award] may recognize the existence of a new customary law and in that limited sense it may no doubt be regarded as the final stage of development, but, by itself, it cannot create one.

In addition, as explained by Prof. Dumberry, a final decision on a rule of custom may not only impact arbitral tribunals, which may apply the same reasoning in future decisions, but also the conduct of States in response to the tribunal’s finding.[21]

In sum, although arbitral awards do not create rules of custom under international law, arbitrators may have an important role in recognizing those rules and influence subsequent State practices.