Total Number of ICSID Cases in 2021

The ICSID Secretariat also traditionally acts as an administrative authority in several non-ICSID cases, offering administrative support and facilities in State-State and investor-State proceedings conducted under non-ICSID rules. The ICSID Secretariat also provides administrative support to investor-State arbitrations under the UNCITRAL Arbitration Rules, free trade agreements and other ad hoc mechanisms, even though the number of such cases slightly decreased in 2021 (in 2020, for instance, ICSID administered 16 UNCITRAL investor-State arbitrations whereas, in 2021, the number decreased to 14)(see ICSID Caseload Statistics (Issue 2022-1), p. 22).

Most arbitrations registered in 2021 were treaty based (58% of the total number of cases were based on Bilateral Investment Treaties (“BITs”)). This is in line with the general average and trends over the 1966-2021 period. A significant decrease, however, is notable in cases brought under contracts (10% vs. 15% in the past on average) and under investment laws (3% vs. the average of 8%). There was also an unsurprising decrease in cases brought under the North American Free Trade Agreement (“NAFTA“), substituted last year by the United States–Mexico–Canada Agreement (“USMCA”), which, taken together, amounted to only 12% of the arbitrations. ICSID also saw its first case registered under the ASEAN-China Investment Agreement (Qiong Ye vs. Cambodia, ICSID Case No. ARB/21/42), which was registered on 1 September 2021. 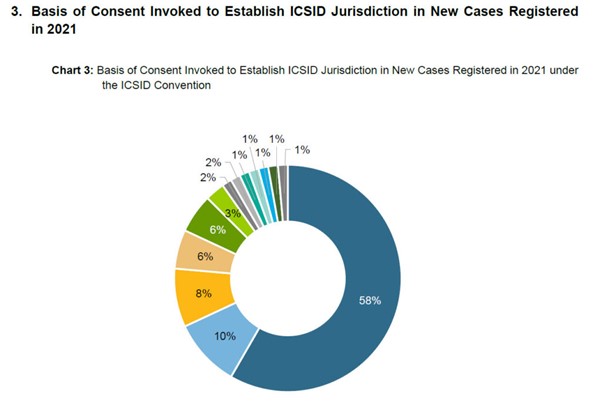 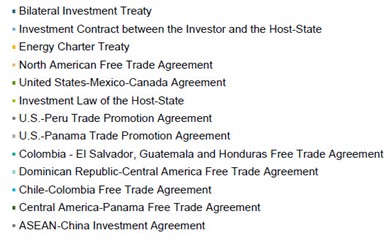 Regarding the geographical distribution of new ICSID cases depending on the State Parties involved, there was a slight increase in the number of Parties from the Americas, which now share the same place as Parties from Eastern European & Central Asia (23%), followed by Sub-Saharan Africa (15%), Central America & the Caribbean, Middle East & North Africa, North America and Western Europe (9%)(see ICSID Caseload Statistics (Issue 2022-1), Chart No. 4):

In terms of individual countries, nine new cases were brought against Peru in 2021, the leader, and three against Ukraine, Mexico and the United States. The distribution depending on the State-Parties involved looked as follows (ICSID Caseload Statistics (Issue 2022-1), Chart No. 5): 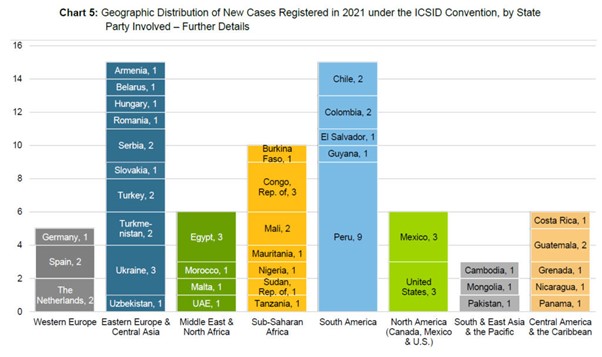 The energy sector, as is typical, holds first place with 29% of cases involving the oil, gas and mining industry and 18% related to electric power and other energy recourses. The construction sector is another prominent sector, holding second place (16.5% of disputes), followed by disputes in information & communication (11%) and the transportation industry (7.5%)(ICSID Caseload Statistics (Issue 2022-1), Chart No. 6): 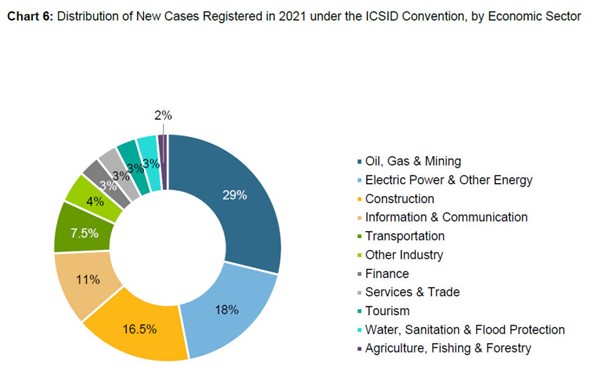 In comparison to previous years, there is significant progress in the balance between women and men appointed as arbitrators, conciliators and ad hoc committee members. In 2021, women represented 31% of arbitrators, ad hoc committee members and conciliators in comparison to 69% men, which is a significant increase in comparison to previous statistics for the 1966-2021 average and, generally, a positive development (ICSID Caseload Statistics (Issue 2022-1), Charts: No. 8 & 9): 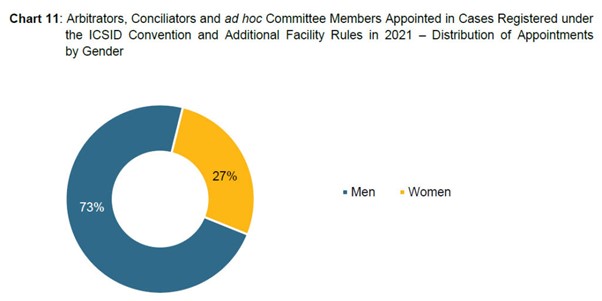 Regarding the nationality of arbitrators, conciliators and ad hoc committee members appointed in 2021, the vast majority were U.K. and U.S. nationals (22, and 21, respectively), followed by French (17), Canadian (11) and Spanish (10) nationals. ICSID has also seen an increase of arbitrators from Western Europe (43%) in comparison to 2020, followed by North American (18%) and South American (14%) nationals, even though the number of appointments from South America has seen a significant drop in comparison to previous years (for more details see ICSID Caseload Statistics (Issue 2022-1), Chart No. 10).

64% of arbitration proceedings under the ICSID Convention and Additional Facility Rules concluded in 2021 were decided by Tribunals, whereas 36% were settled or the proceedings were otherwise discontinued. Out of the disputes decided by Tribunals, 31% of awards upheld Claimant’s claims in part of in full, 18% dismissed all claims, and 15% declined jurisdiction (for more details see ICSID Caseload Statistics (Issue 2022-1), Chart No. 7a). This is fairly similar to the average for the 1966-2021 period.