On 14 August 2020, the International Center for Settlement of Investment Disputes (“ICSID”) published its newest case report, ICSID Caselaw – Statistics (Issue 2020-2), providing data on new cases for the fiscal year 2020 (“FY2020”), i.e., until 30 June 2020.[1] ICSID publishes its reports on ICSID caselaw statistics bi-annually, examining all ICSID cases since the first registered case in 1972, updating it with the most recent statistics. ICSID Caseload – Statistics provides empirical data about general trends in international investment disputes – from the number of new cases, the basis of consent establishing jurisdiction, the geographical distribution of the parties, outcomes of the proceedings, to data about the arbitrators and their nationalities, their geographic origins and gender. The ICSID Caselaw – Statistics are published in the ICSID’s three official languages, English, French and Spanish, and are updated every six months.

According to the ICSID Caseload – Statistics (Issue 2020-2), ICSID has reported its second-highest number of administered cases in a single year, with 40 new cases registered in the first half of 2020. Out of these, 37 cases were registered under the ICSID Convention Arbitration Rules, and three under the Additional Facility Rules:

Sources of Consent to ICSID Jurisdiction in New ICSID Cases

As was the case in previous years, the bases of consent invoked to establish jurisdiction in new cases were primarily Bilateral Investment Treaties (“BITs”), accounting for 57% of all new cases registered in FY2020.

The second most common manner of establishing jurisdiction was the Energy Charter Treaty, followed by Investment Contracts between the Investor and the host-State, with 16% and 11 % of all new cases at ICSID in FY 2020.

Regarding the geographical distribution of new ICSID cases depending on the State Parties involved, by far the largest number of State Parties are from South American countries (32%). In second place are State Parties from Eastern Europe & Central Asia (20%), followed by Western Europe (13%), the Middle East, North Africa and Sub-Saharan Africa (10%), Central America and the Caribbean (7%). The smallest number of Parties come from North America (Canada, Mexico and the U.S.) (5%) and South & East Asia & the Pacific (merely 3%). The geographical distribution of all new cases depending on the State Party involved is shown in Chart 5 of ICSID Caseload Statistics: 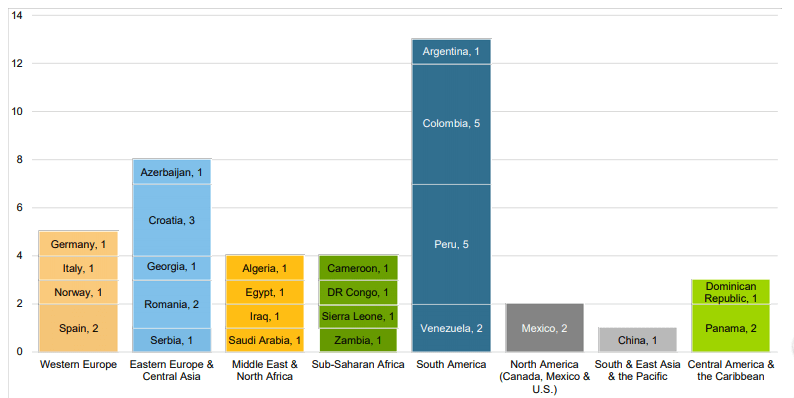 Regarding the distribution of new ICSID Cases by economic sector, the largest number of cases arose in the Oil, Gas & Mining Industry (30%), followed by Electric Power & Other Energy (20%) and the Construction industry (17%).

The remaining 23% of new ICSID Cases arose in the Financial and Transportation sectors, followed by Agriculture, Fishing & Forestry and Services & Trade (accounting for a mere 3% of new cases).

The geographical distribution and gender of the arbitrators, conciliators and ad hoc Committee members appointed in FY2020, unfortunately, remains unequal, with a vast majority of appointments from Western Europe (37%) and North America (20%), followed by South America (16%).

Regarding the nationality of arbitrators, conciliators and ad hoc Committee members, as of 30 June 2020, the most commonly-appointed nationals came from Argentina, France, the United Kingdom and the United States (15 members each), followed by Mexico (12), Australia, Canada and Spain (9) (for more details see The ICSID Caseload Statistics (Issue 2020-2), Chart 10).

Regarding gender,  the vast majority of arbitrators, conciliators and ad hoc Committee members appointed in FY2020 remain male (86%), with only 14% of female members being appointed (The ICSID Caseload Statistics (Issue 2020-2), Charts 11&12).

The vast majority of ICSID proceedings terminated in FY2020 concluded by a decision of the Arbitral Tribunal (74%), out of which 35% were terminated with an award upholding claims (in part or full) and 26% with an award dismissing all claims. Merely 9% of the cases terminated by an award declining jurisdiction.

The remaining 26% of disputes were settled or proceedings were otherwise discontinued, either on the request of both parties (62.5%) or, in a minority of cases, by the request of one party (12.5%) or by settlement agreement (12.5%).

In several instances, proceedings were discontinued for lack of payment of the advance on costs, accounting for 12.5% of cases (for more details see The ICSID Caseload Statistics (Issue 2020-2), Chart 7). This is perhaps unsurprising, as ICSID arbitrations are typically expensive.