It comes as no surprise that costs and delays are also two great areas of concern to the parties in international arbitration. As the Queen Mary University of London (QMUL) International Arbitration Survey 2021 finds, time and costs are “perennially acknowledged” as the biggest concerns for arbitration users. The 2021 Survey confirms the findings of 2018 QMUL Arbitration Survey which also concluded that time and cost continue to be seen as “arbitration’s worst feature”, whereas the wish for greater efficiency was cited as the main driver for the future evolution of arbitration.

Legitimate concerns regarding the increasing cost and duration of international arbitration have been recognized by leading arbitral institutions. For this reason, over the years they have implemented various techniques to reduce time and costs of arbitration and to increase its efficiency, amending their procedural rules in order for international arbitration to maintain its core benefits – providing a swift and cost-efficient method for the resolution of parties’ disputes while ensuring due process.

How Long Does an Average Arbitration Take?

The LCIA was the first arbitration institution to release a comprehensive report on costs and duration of LCIA administered arbitrations. In 2017, the LCIA released an updated LCIA Report Facts and Figures – Costs and Duration covering all cases administered by the LCIA between 1 January 2013 and 31 December 2016.[1] The key findings of the LCIA study have shown that: 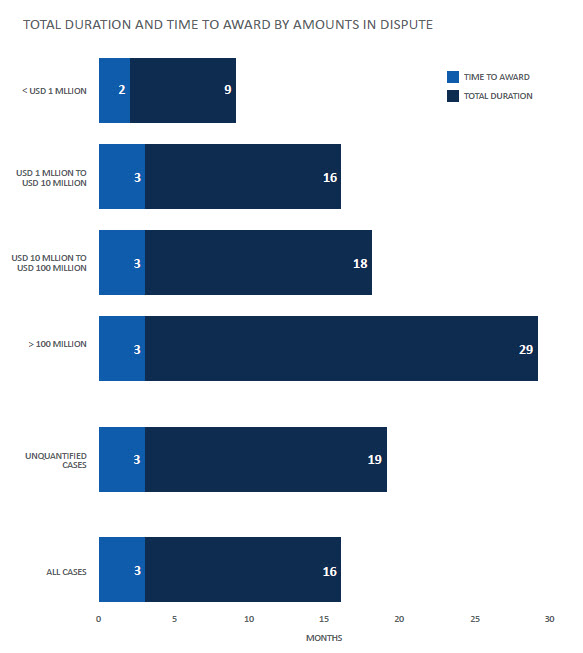 The SCC also releases yearly case statistics, including information on how many cases have been administered by the institution and the time from filing a request for arbitration to the issuance of the final award. The SCC statistics for 2020, for instance, showed a shortened time from referral to the SCC until the issuance of the final award as compared to previous years. For awards rendered under the SCC Arbitration Rules, 40% were rendered within 6 months from referral to the tribunal, and another 42% were rendered within 12 months, which is less time in comparison to 2019 (27% within 6 months and 50% within 12 months).[2] 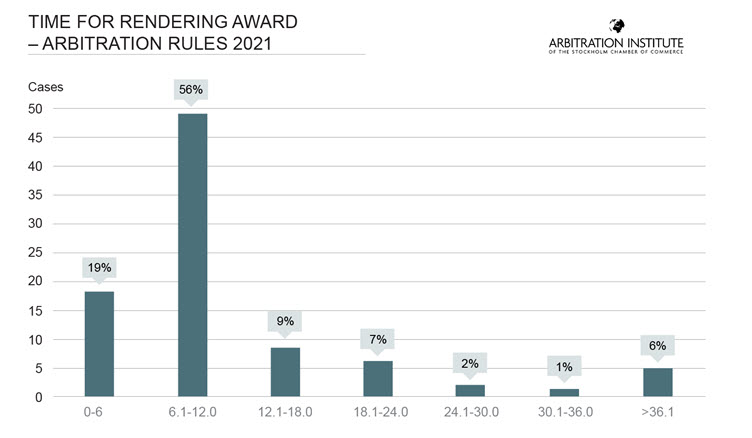 The SIAC also released a SIAC Costs and Duration Study in October 2016, encompassing cases filed with the SIAC under the 2013 SIAC Rules.[4] The SIAC report shows that the mean duration of cases administered by the SIAC was 13.8 months, whereas the median duration was 11.7 months, which is lower than any other arbitral institution. The SIAC data also reveals slightly different durations for arbitrations with a sole arbitrator and three-member tribunal, albeit this difference is not as significant:

On 22 June 2021, HKIAC released an updated report on average cost and duration of HKIAC arbitral proceedings, following reports published in 2018 and 2016. The most recent report covers all HKIAC cases in which a final award or decision was issued between 1 November 2013 and 31 May 2021, including arbitrations which were not withdrawn, settled or terminated prior to the final award.[5] The overall findings show that the median duration of HKIAC arbitration was 13 months, whereas the mean duration was 16.9 months.[6]

Although the ICDR does not publish its official statistics on the time and cost of arbitration, in the ICDR Time and Cost, Considering the Impact of Settling International Arbitrations Report, the ICDR indicated that the mean duration of arbitration for all ICDR tribunals was 15.4 months, whereas the median duration was 13.1 months. Interestingly, the ICDR Report, which is based on ICDR cases that closed between 1 January 2015 and 31 December 2017, reveals that 72% of ICDR arbitrations settle prior to an award being rendered and that 39% of those settled cases are resolved prior to tribunal fees being incurred. The ICDR considers that it has the quickest mean and mediation duration statistics among the arbitral institutions that publicly report duration statistics with comparable data sets, although the comparison method is not necessarily accurate as it compares different data sets and reporting time periods.

Recognizing that the time and costs of international arbitration are a growing concern for its users, in 2018 the ICC published the ICC Arbitration Commission Report on Techniques for Controlling Time and Costs in Arbitration (Second Edition), following its first edition in August 2007, providing a set of useful techniques to tribunals and parties aimed at increasing the time and cost efficiency of international arbitration. While the techniques indicated in the report are in no way supposed to be exhaustive, they provide useful guidance on how time and costs may be reduced, from the pre-arbitration stage to the issuance of the final award. Some of the techniques recommended by the ICC include:

Notwithstanding the differences in data collection methodologies and sampling, including reporting periods, certain rough conclusions may nevertheless be drawn. The SIAC and HKIAC still appear to be the most efficient institutions, followed by the LCIA:

A common trend, recognized by most arbitral institutions, is that there is generally a need to reduce both the time and cost of international arbitration, which is why institutions are working on implementing various techniques for controlling time and cost in arbitration and updating their procedural rules accordingly.

It should finally also be noted that, while the time and costs of arbitration are often interrelated, as costs typically depend on the time spent by tribunals and legal counsel on the case, this is not always the case. Different arbitral institutions have different methodologies for calculating their administrative fees and the fees of arbitral tribunals (see The Costs of Arbitration). In addition, certain arbitration law firms offer capped fee arrangements to their clients for the entire arbitration, instead of billing their clients on an hourly basis, which can not only lead to a significant cost reduction but also demonstrates that the time and cost of arbitration are not always linked.

[4]              Duration was calculated as full period between the date of commencement of arbitration and the date of issuance of the final award, inclusive of any stay periods.

[6]              As HKIAC clarified, the median is the middle number of a set of values. The mean is the sum of all of the values in a set of data, divided by the number of values. Given the distribution of the data concerned, HKIAC considers that the median value is the more meaningful and robust value, as it minimizes the skewing effect of outliers.