On February 26, 2022, Ukraine filed a claim against Russia before the International Court of Justice to institute proceedings in connection with the military operations commenced by the Russian Federation in Ukrainian territory on February 24.[1] The application is based on Article IX of the 1948 Genocide Convention,[2] according to which the International Court of Justice (ICJ) is responsible for resolving disputes between the Contracting parties “relating to the interpretation, application or fulfilment” of the Convention. In this manner, Ukraine was able to ensure that the Court would adjudicate the claim, even though neither of the Parties is amongst the 73 States who have accepted the compulsory jurisdiction of the ICJ. [3] However, even in case of a favorable ruling, the real challenge will be the enforcement of any orders the Court might issue. 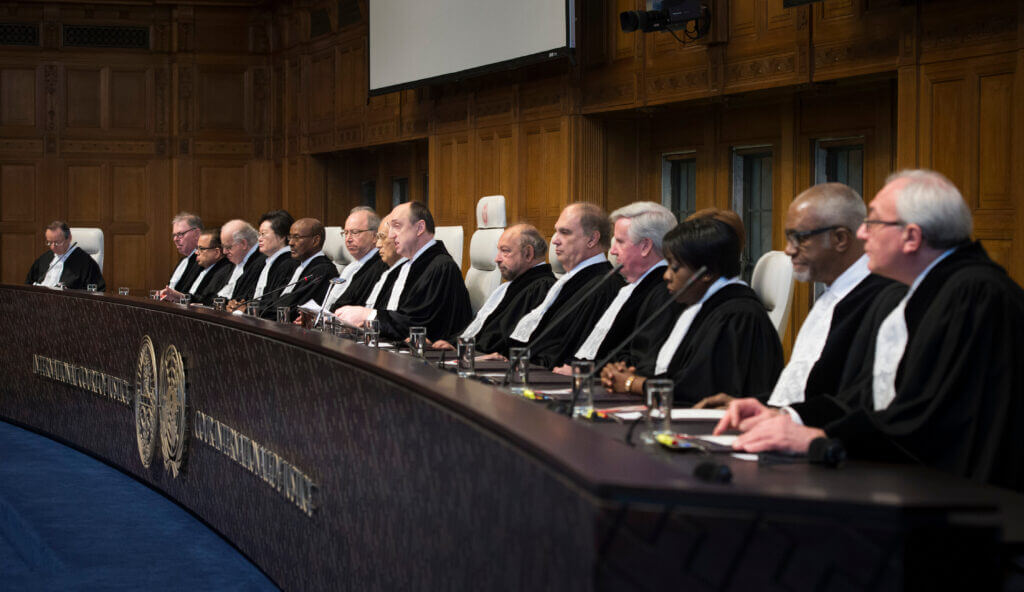 In its application, Ukraine alleges that Vladimir Putin initiated “special military operations” on the basis of claimed acts of genocide that occurred in the Luhansk and Donetsk oblasts of Ukraine.[4] The applicant also contends that it is in fact the Russian Federation that is “planning acts of genocide in Ukraine”.[5]

According to Ukraine, since the Spring of 2014, the Russian Federation has systematically supplied legal armed groups with heavy weaponry, money, personnel and training. Ukraine views this as Russia’s attempt to assert its influence and dominance over the country. Two of these armed groups (the Donetsk People’s Republic (DPR) and the Luhansk People’s Republic (LPR)) have now been recognized by Russia, before initiating military operations “with the express purpose of preventing and punishing purported acts of genocide”.[6]

In its application, Ukraine also refers to its already pending claim on the merits against Russia concerning the Application of the International Convention for the Suppression of the Financing of Terrorism and of the International Convention on the Elimination of All forms of Racial Discrimination,[7] filed on January 16, 2017 and slowly making its way through ICJ proceedings, and it states that the pleadings in that case “document Russia’s violations of its international obligations from 2014 onwards by failing to take measures to prevent the provision of weapons and other support for the DPR and LPR”.[8]

Together with the application, Ukraine also submitted a request for provisional measures, in which it seeks to “protect its rights not to be subject to a false claim of genocide and not to be subjected to another State’s military operations on its territory”.[9] The requested measures include ordering the Russian Federation to suspend the military operations and to refrain from any action that may aggravate or extend the dispute.[10] 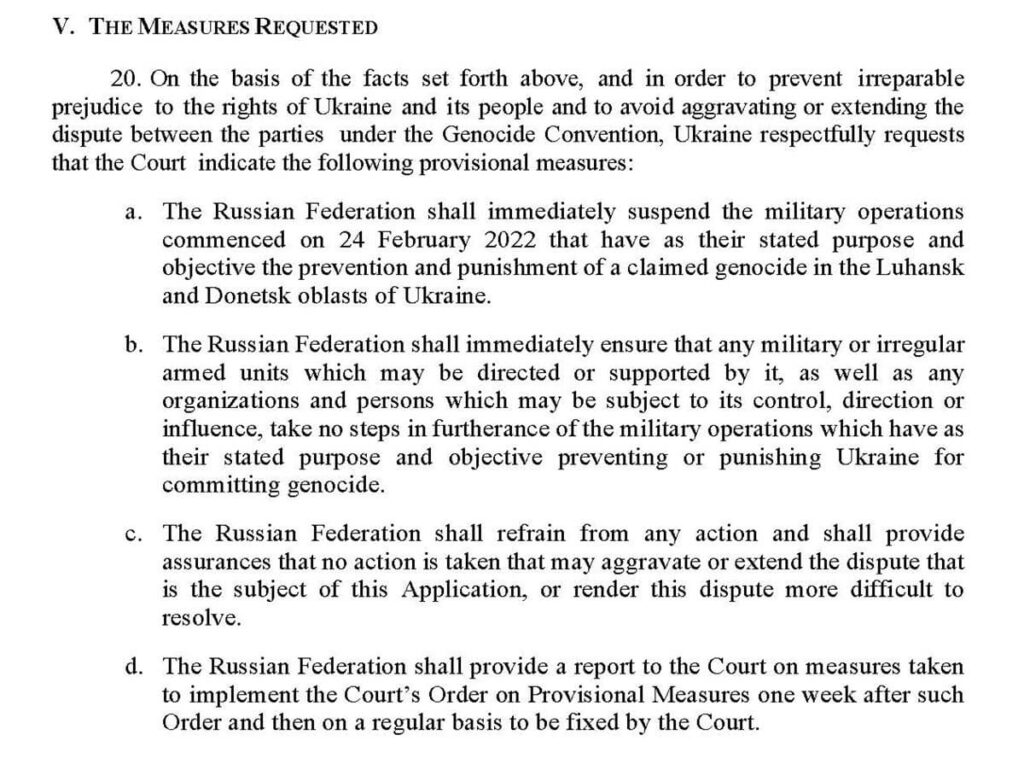 Reacting to the request, pursuant to Article 74(1) of the Rules of Court, the President of the ICJ called the attention of the Russian Federation to the need to act in a way that will enable the orders taken by the Court to have their appropriate effects.[11]

The Court has also announced that public hearings will be held in the case where Ukraine can present its oral arguments on Monday, March 7, followed by Russia’s arguments presented the following day. The hearings will be streamed on the website of the Court.[12]

As mentioned above, the real issue for Ukraine after obtaining a possibly favorable judgement, or if the Court proceeds to order the provisional measures, would be the enforcement of any decision made. Although both countries are members of the United Nations, the Court has no ability to enforce such rulings. Ukraine could ask the Security Council of the United Nations to take action against Russia, but as a permanent member of the Council, the Russian Federation has the ability to veto any such request.

In the meantime, the European Court of Human Rights, where Ukraine has also initiated a claim against Russia, has granted urgent interim measures in connection with the military operations and indicated to the Government of Russia to refrain from military attacks against civilians and civilian objects.[13]

[2] Convention on the Prevention and Punishment of the Crime of Genocide, GA Resolution 260 A (III) of 9 December 1948.

[3] Declarations recognizing the jurisdiction of the Court as compulsory – https://www.icj-cij.org/en/declarations